Dreaming of a Soft Landing

Just as our Covid fears began to wane, a new fear jumps on the scene.  It's the same fear that I grew up with – the same fear that made us second-graders hide under our desks.  In fact, it was those same evil Russians, the "Evil Empire," Reagan called it, that posed the same nuclear threat.  Remember that?

I also can never forget the feeling of standing in the middle of Red Square just a few years later, in 1993.  To my left was the famous GUM shopping mall, straight ahead towered the magnificent St. Basil's Cathedral, and to my right the infamous Kremlin, with the stoic Tomb of Lenin just in front.

Soldiers – young boys, really – took turns standing guard and every hour had an elaborate and ceremonial "changing of the guard," not unlike Arlington Cemetery or the Tower of London.

The Sickle and Hammer were gone by 1993, and statues of Stalin could be seen toppled and defaced everywhere.  But for some reason, Lenin was still revered.  His statues and likenesses largely remained untouched.  I strained to understand the difference between the two, and I still do today.

But of all the things I did and saw, the thing that really struck me was how incredibly nice and friendly everyone was to me.  Clearly, I was an American, with my Atlanta Braves jacket and jean shorts and Jansport backpack.   If you have traveled internationally, then you know we stand out like neon signs.

I expected some hostility being from the "Great Satan" and all, but I encountered the exact opposite.  Standing there in the middle of Red Square with my host family (thank you Rotary Club International), it hit me like a ton of bricks!  I had been lied to.  Misled by my government to believe that these Russians, these Soviet red communists, hated me and wished me harm.

What I came to realize is that there is a big difference between a people and their government.  I also realized that the Russians feared their own government far more than they feared ours. Since the time of Ivan the Terrible, the Russian people have had very little say over their own governance.  Putin says that they don't know how to, so he is "benevolently" taking charge.

In Ukraine, they have obviously had a lot to worry about and contend with, given recent events.  But it is not the common Russian who is behind this.  This is solely Putin's doing.  And he is destroying two beautiful countries – not just Ukraine, but Russia too.

It is the common Russian who will suffer most from a collapsed ruble and economic sanctions.  It could literally take decades for international concerns to pour the type of infrastructure investment back into Russia to bring it back to pre-war levels.  And for what?

Power politics is a cutthroat game, the more the power, the more ruthless the players.  It takes a very ruthless politician to gain complete control of a country, not to mention other ruthless colleagues, whose loyalty is secure as long as it remains convenient.

Remember what Machiavelli said? “Since love and fear can hardly exist together, if we must choose between them, it is far safer to be feared than loved.”  Apparently, Putin took it to heart.

By now there is little chance of Putin completely pacifying the country into subservience.  He must now figure out a way to get out of this quagmire while appearing to save face.  It would seem the “liberation” of the Donbas region is his best chance.

I actually expect a robust U.S. stock market rally as the situation is (somewhat) resolved.  Russia is economically ruined though, even more so than Ukraine.  Imagine the amount of global support and funding that will find its way to the demolished country.  But who will now invest in Russia?

Obviously, the U.S. stock markets took a hit in February when Russia invaded Ukraine, but the slide had already started to occur.  Here is the one-year chart for the NASDAQ. 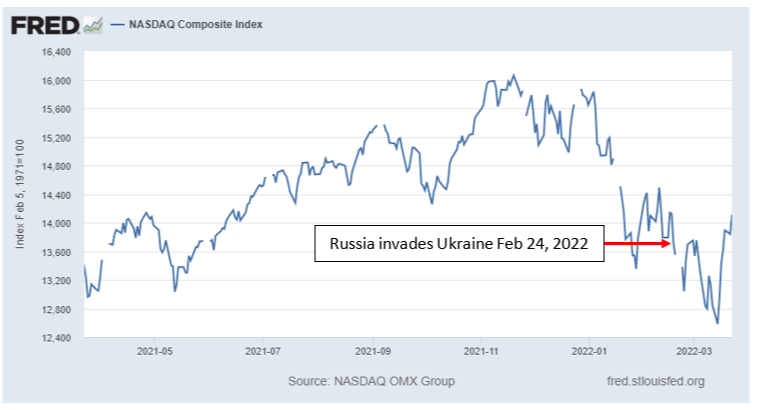 Notice that the market had already started dropping in January.  This was due mainly to Fed statements that rate increases were on the way for 2022.  Of course, the invasion of Ukraine certainly exasperated things.

Most recently, Fed Chairman Jerome Powell, in a policy speech on March 21, 2022, indicated that interest rate hikes will continue this year as he, in his own words, admits that “inflation is much too high”:

“The median projection that accompanied last week's 25 basis point rate increase shows the federal funds rate at 1.9 percent by the end of this year and rising above its estimated longer-run normal value in 2023.”

This statement was more or less expected, but he said something else that took some people by surprise: “if we conclude that it is appropriate to move more aggressively by raising the federal funds rate by more than 25 basis points at a meeting or meetings, we will do so.”i

In Fed Speak, that means they might raise rates by 50 basis points (1/2 of 1%) at one or more of their meetings this year.  They know as well as I do that most of the periods of rising interest rates resulted in a recession.   But this time they're hoping for a "soft landing."

Some have argued that history stacks the odds against achieving a soft landing, and point to the 1994 episode as the only successful soft landing in the postwar period. I believe that the historical record provides some grounds for optimism: Soft, or at least soft-ish, landings have been relatively common in U.S. monetary history.  In three episodes—in 1965, 1984, and 1994—the Fed raised the federal funds rate significantly in response to perceived overheating without precipitating a recession.

Read the whole statement for yourself here.i﻿

You may be asking yourself, "OK, is this really so important?"  The answer is a resounding yes.  In fact, it is one of the three most important factors when it comes to investing.  The others being price and earnings.

Take a moment to study the chart on the next page.  It really tells the story and is prima facie evidence for the utter failure of the Fed.  First, notice that there are some grey lines that run vertically.  These lines represent recessions.  To make it on the chart, a market drop is not considered a recession unless it lasts for more than 20 months. 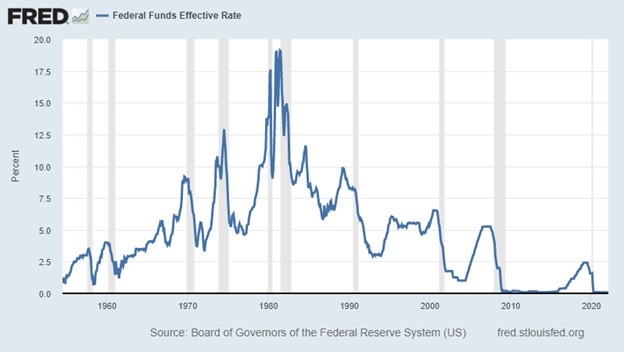 But note that just before each recession (vertical grey line) you will see a peak in rates, and then a subsequent sharp drop.  The urgent and drastic reversal in each instance is a response to a significant market correction that was itself caused by an increase in rates.  This cycle repeats itself again and again with the Fed each time promising they have it right this time.  Powell again:

Add to that the information I provided in my last letter letter Proceed With Extreme Caution iv wherein I explained that the "Buffett Indicator" was at an all-time high, the promise of further rate hikes this year, and a rather hawkish warning about higher than normal rate hikes if inflation persists, all point to the same conclusion: danger.  And folks, inflation will persist.

I have been warning about inflation since my letter of July 2010, So Where's All the Inflation?v The formula for inflation is very simple:  The more units of a thing you have, the less each unit is valued.  Scarcity increases value.  Rembrandt paintings are so expensive because the supply is very limited vis-à-vis the demand for them, and crucially, there are no more being made.  This is true of 1950 Ferraris and 1920 Tiffany Lamps.  I'm sure you can think of many other examples.

This is not to say that every Congress and every president that did not support a balanced budget is not also at fault.  They all are.  We put the finances of our country and our children's future in the hands of people who don't understand finances.  The Fed is repeatedly using tools and practices that have been proven to fail, and fail miserably.

The question now being asked in some circles is "what will replace the dollar?"

On March 9, 2022, President Biden signed an executive order to, among other things, "Explore a U.S. Central Bank Digital Currency (CBDC) by placing urgency on research and development of a potential United States CBDC, should issuance be deemed in the national interest."vi

Do you think it will ever be "deemed in the national interest?"

You can bet on it.

In the meantime, as investors, you can see that our defensive positions (Treasuries, oil, gold, silver, and aerospace/defense) really performed well as stocks fell this year, even though they lagged the stock rally last year.

When preparing for a market downturn, it is necessary to get conservative prior to the event, which no one can predict perfectly. Thus, you almost always miss out on the tail end euphoria.  And as we have seen twice now—once during the covid pandemic and now during the Ukrainian crisis—a market selloff can be triggered by unforeseen events.

As I said before, we believe this Ukrainian crisis will abate before long, and stocks will probably rally a good bit, giving the Fed a greenlight to continue to raise rates.  Inflation is likely to persist or even pick up, and the Fed will be forced to conclude that "it is appropriate to move more aggressively."

At this point there is really nothing for us to do but watch and wait.  We are looking for a 30-35% drop from the high off the S&P 500 and Dow Jones Industrial Average.  As in the dot.com crash, the Nasdaq could shed roughly half.

When a major drop does occur—which we suggest could be sometime between September 2022 and April 2023, depending on how much or little the Fed raises rates—we have a shopping wish list ready to go.

If you are concerned or have questions about our strategy, please reach out me at kevin@magellanplanning.com.  I would love to hear from you.

I'll have lots of exciting charts!

As always, we appreciate having you as a client and look forward to seeing you soon.