September 2021 – Despite this week’s market turmoil, no doubt you have noticed that the stock markets have reached near all-time peaks recently.  In the case of the NASDAQ, the chart has gone vertical—nearly straight up.  Experienced investors (like our clients) have seen this before and remember the subsequent fallout.

The chart below is the NASDAQ, where most of the technology stocks are traded.  Note the Dot.Com bubble in 2000.  Does it look anything like today?  When markets go up that dramatically, well...

Every time the markets reach a high point like this, people always say, "oh, this time it's different."  The first time I heard this was in 1987, but I was too young really to appreciate the gravity of that mindset.  Maybe you remember better?  When was the first time you heard this?  I would be interested to know.

For me, having entered the financial business full time in 1994, I definitely remember the bashing that Warren Buffet took in the late 1990's as he missed the last couple of years of the run-up:  "Has the Oracle of Omaha lost his touch?" the headlines questioned.  I even wondered myself.  But I think we all know who got the better of that one.

Speaking of Warren Buffet, he has an indicator of his own that he has been using for decades.  Indeed, it is even called the “Buffet Indicator.”

The Buffet Indicator compares the value of the Wilshire 5000 (the 5000 largest stocks in the U.S.) with the country’s Gross Domestic Product. 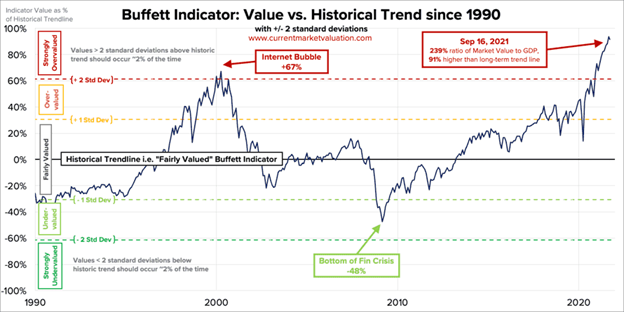 The chart above tracks this indicator since 1990. Note that there are five tiers: the historical “norm” trendline and then two above and two below this trend line. We call these standard deviations. When the price of stocks drops below the trendline into the “undervalued” or “strongly undervalued” region, that would be indicative of a good time to buy.

Conversely, when the price of stocks rises above the trendline into the “overvalued” or “strongly overvalued” region, that would be indicative of a poor time to buy, perhaps even a time to sell.

As of September 16, the Buffet Indicator hit an all-time high: 239% ratio of Market Value to GDP, which is 91% higher than the long-term trendline! On Monday, September 20, the Dow Jones Industrial Average had an intraday drop of almost 1000 points. This could be a one-off or an indication that some investors are feeling nervous about continued growth.

Also, no one is really talking about the elephant in the room: corporate taxes are (most likely) going up. For corporations making more than $10 million, the top rate will increase to 26.5%.

Taxes cut into earnings, and the price/earnings ratio is already at an all-time high. If earnings are hit, that could be a triggering event to a selloff. Of course, that is more or less foreseeable which implies that the true impetus will be something else, something not so foreseeable.

When major stock market drops occur, the Fed generally reacts by doing two things: 1. Buying treasuries (which is equivalent to printing money, also called stimulus, also called expanding the money supply, also called expanding the balance sheet, also called quantitative easing). 2. Reducing the Fed Funds rate.
They also have engaged in a myriad of other schemes like "TARP" and "Operation Twist," but these are just variants of the first two weapons in their arsenal—weapons that are almost out of ammunition.

If you look at every major market decline since 1950, you will notice a drop in the Fed Funds rate just afterwards. Take a look: This is a chart of the master rate that the Fed controls. The grey shaded lines indicate a recession, but not all market drops cause an official recession.

In any event, look at what happens to the rate before, during, and after a recession (which occurs after a sharp and extended market decline).  That's right, the rate tanks.  That has worked up until now.

The last major drop in the Fed Funds rate occurred just last year after the March 2020 meltdown.  This was to fight the Covid economic lockdown.  Look at where the rate is now.  There's nowhere to run!

Currently, to my eyes, it looks like the rate has nowhere to go but up.  Unless, like some of the European countries (and Japan), we go negative.

Could we see negative interest rates here in the United States?

If we have a major market pullback as the Buffett Indicator seems to suggest, how could we avoid them?

The only other option is more stimulus, more helicopter money, more inflation, more political unrest (which is always exacerbated by inflation), and more middle-class families slipping into poverty.  Both political parties should be utterly ashamed of the decades of unbridled spending.  Essentially, it is generational warfare.  We spend the money and leave them with the debt.  (Probably best not to mention it to them.)

In terms of investing and our strategy going forward, Warren Buffet gives us good guidance there too, not by what he says, but by what he does.  In times like this, he goes relatively silent, uttering a short warning or two about overvaluations and complaining about the lack of "good buys."  All the while he stockpiles in liquid, safe assets, and waits—patiently.   Sometimes he has to wait a couple of years, but then all of a sudden, when there's blood in the streets, as they say, he pounces.

The recent market turmoil has indicated to us that our safe assets are performing exactly as we had expected, which is to react in the opposite direction of falling stocks.  In the event of a major selloff, we have a shopping wish list at the ready.

The one ingredient we don't have to make it all go down perfectly is timing.  But I've been asked a thousand times, and if given the option to be early or late, the answer is always the same: be early.  Unfortunately, the waiting part is difficult for some people, and the fear of losing out (FOLO) can cause one to take unwise risks.  Our job is to help shield you from the fear/greed dichotomy that so often wrecks a good long-term financial plan.

Of course, I don't need to remind you to never invest money with someone who calls you on the phone with a great deal.  Nor invest in anything that you hear about on social media.  If you have a question about something that sounds too good to be true, reach out to me for a second opinion.

Con artists have reached all-new levels in their ability to scam you.  NEVER give anyone your personal information over the phone or through email unless you initiate the connection.  And Henry has asked me to remind you that the IRS will never contact you via phone or email, only by mail.

The coming months are shaping up to being quite interesting.  If you find yourself with questions or concerns, please reach out to me at kevin@magellanplanning.com.