Pedal to the Metal

January 2021 – Happy New Year!  I trust this missive finds you well.  We are all looking cautiously forward to a better year than last.

There’s a lot to talk about, so I’m just going to jump right in.  You’ve no doubt heard about the stock market reaching new all-time highs in the midst of all the election turmoil and subsequent fallout.  One would have thought the market would have retracted with so much political uncertainly and rigmarole, especially now that it's all but certain that the corporate tax rates will go back up.

Nonetheless, as I write this, the Dow Jones Industrial Average is over 31,000!  What gives?. 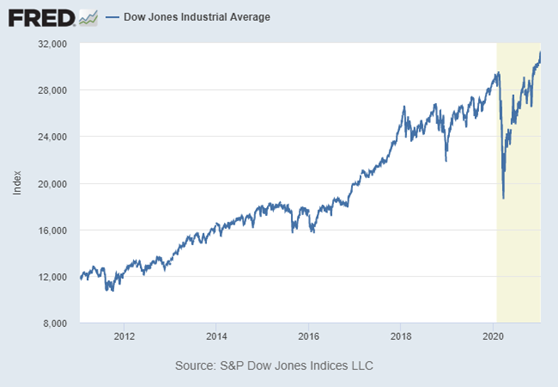 The answer can be found in three simple words:  Stimulus, stimulus, and stimulus.

That's not the same stimulus three times mind you; that's three different kinds of stimulus simultaneously--in a way that can be described as "pedal to the metal."

You've heard that saying, which is an analogy to a race car driver pressing the gas pedal as far as it would go--down to the metal of the floorboard.

These next three charts should illustrate exactly that, but in a financial sense.

Stimulus Number One: Interest Rates.  The chart below is the Fed Funds Rate, considered the "base rate" to all other rates. 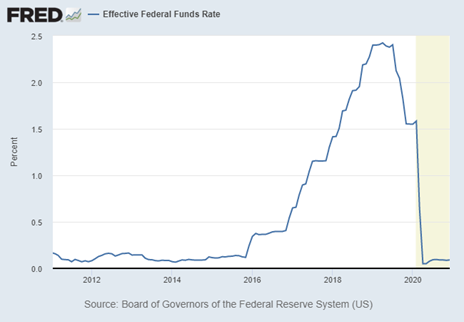 It is determined by the Federal Reserve Board, not free market forces like supply and demand.

Having dropped rates to near zero after the 2008 Great Recession, the Fed finally started raising rates in 2016.

Now, however, you can see that rates are now back down to near zero.  This is similar to what's been going on in the rest of the world's leading economies.  Some countries still have negative rates.  According to Bloomberg, this doesn't look like it will change anytime this year:[i]

Central banks are set to spend 2021 maintaining their ultra-easy monetary policies even with the global economy expected to accelerate away from last year’s coronavirus-inflicted recession.

In Bloomberg’s quarterly review of monetary policy that covers 90% of the world economy, no major western central bank is expected to hike interest rates this year.

The Federal Reserve enters 2021 with the pedal to the metal on monetary policy to help the U.S. economy recover from the coronavirus pandemic -- and is in no hurry to take its foot off the gas.  [See, I'm not the only one to use the analogy.]

Even as Chair Jerome Powell says he can see the “light at the end of the tunnel” thanks to vaccines that should be broadly available by mid-year, he stressed there would be no hasty withdrawal of support.

Officials have signaled they’ll hold interest rates near zero through at least 2023, and promised to keep buying bonds at a monthly pace of at least $120 billion until “substantial further progress” had been made toward the targets for maximum employment and 2% inflation.

THAT brings up the next point, Stimulus Number Two: Bond Buying:

This can be confusing for people, and perhaps intentionally so, because it is certainly deceptive (to me at least).   What is bond buying?

Since we are always in need of more money, the U.S. Treasury "creates" bonds (also called "treasuries") that it "sells" to the Federal Reserve Bank.

The Fed then "buys" those bonds with money that is then itself "created."

Those bonds then become an "asset" of the Federal Reserve.

The chart here represents those assets, which corresponds to newly created money. 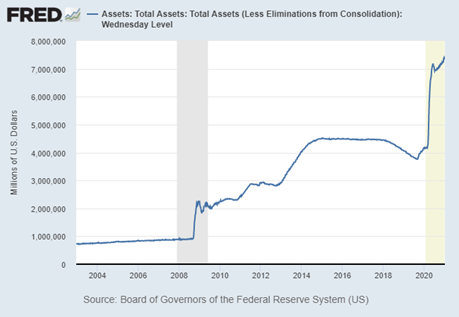 You can see the Fed's assets were less than $1 trillion before 2008 and had reached $3 trillion by 2013.  We started to "taper" after 2018 only to be forced to bail out the economy in 2020 after the virus shut it down.  Since then, you can see more than $3.5 trillion of new money has hit the books.  This can be confirmed by a corresponding increase in the money supply (M1 & M2).

According to the quote above, then, they plan to continue that process to the tune of $120 billion per month.  Almost certainly there will be more stimulus--perhaps much more—which will lead to more debt, more bond buying, more money printing.

But wait!  It gets even better.

You may have heard of bank reserves.  Reserve requirements were first established at the

national level in 1863 with the passage of the National Bank Act.[ii] These were designed to limit how much a bank could loan out by requiring that it keep a portion of its money in reserve.  So, for instance, assume a bank had $200 million in deposits and is required to hold 10%. The bank is now allowed to lend out $180 million, but no more.

Now assume all the people who had deposits at that bank withdrew them all at once.  What would happen?  Well, only the first $20 million to be withdrawn would be solvent--everyone else gets very angry, so they have to lock the doors.  If I were dealing with a bank, I would want a bank with 100% reserves, but these do not exist.

Apparently, after March 26, 2020, banks are no longer required to keep ANY reserves.  That's right – ZERO

They even discontinued the chart series, seen below. 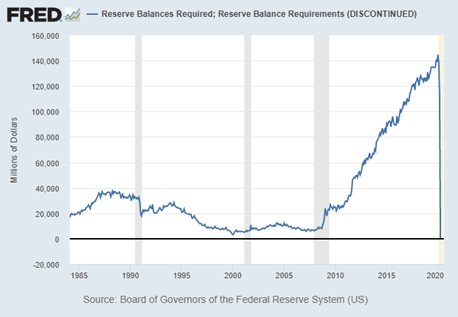 A simple sentence can be found on the Fed's website:

And there you have it.  The flood gates are open.  If I were an evil super-agent paid to destroy a nation's economy, this is exactly what I would do.  Next, I would get everyone on a digital currency that I controlled.  Pretty sure that's coming.

I do not doubt that the market will likely go higher with all this stimulus, but I do not believe it is sustainable.  In fact, I'm afraid we are being set up for big pain.  There are many factors and indicators I could point out as warning signs but let me restrict myself to the most fundamental factor, earnings.

One of the most helpful indicators to me is the Price to Earnings ratio, which is the current stock price divided by the earnings per share.

So, if a stock has a P/E of 5, that's really good if the risk is not too great (which must always be considered).  That means after five years, the stock has paid for itself and all the future earnings are essentially "free".

On the other hand, if stock XYZ had a P/E of 100, that means it would take 100 years for that stock to pay for itself.  Is that a good deal?  How many of us can wait around for a century to realize our profits?

Today, things are getting a bit ridiculous.  Tesla is the quintessential example.  Want to know the P/E ratio for Tesla?  Over 1,500![v]  It would take one thousand five hundred years for this stock's earnings to pay for itself.  Yet people continue to buy it.  Why?  Because they're human.  Search "Tulip Mania" for a little bit of fun history, and you'll see what I mean.

The Fed was in the process of tightening (contracting) the money supply last year when the virus struck.  Since then, as you have seen, it has opened the flood gates to new money.  Thus, we are still expanding, and it looks like there is no end to that anytime soon--at least not this year.

From the chart below, you can see that it's only been this high twice before--once in 2000, and again in 2008.  What happened in the latter part of those years?  That's right:  massive market selloffs of 35% or more, which drove the P/E ratio to back under 20.  See that? 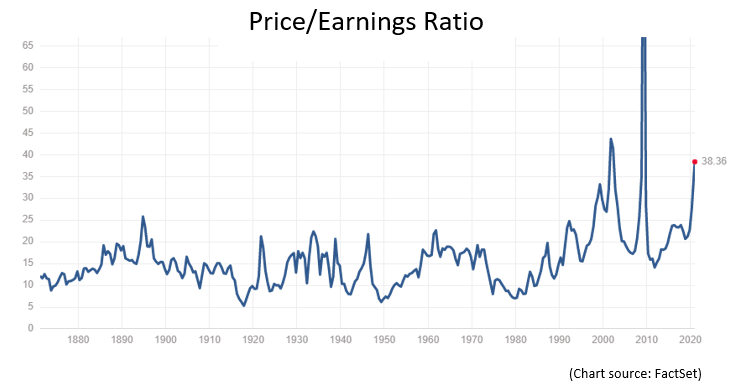 We would be foolhardy to believe this won't happen again.  We don't know how long this rally can continue and we don't know how much higher it can go, but I fervently believe that we are being set up for another massive sell-off, and I am seriously concerned.  I also note that contraction does not begin with actual contraction, but just the mention of it.

How should we proceed, then?  Very cautiously is the ardent answer.  No one ever lost money by selling at a high – and that's where we are.  Our investment committee has therefore voted unanimously to take some profits off the table where practicable.

Of course, to get completely out of stocks is also reckless considering the staggering amount of new money created and near-zero interest rates.  Quality is what we should be focusing on -and indeed we are.  Tesla is a beautiful tulip; but human nature has not changed one bit.

If you are managing your own retirement plan, you may want to consider a commensurate protective move.

If I can be of any assistance, please reach out to me at kevin@magellanplanning.com.

My very best to you and yours; Stay Safe, Stay Healthy, Stay Happy!

The views stated in this letter are not necessarily the opinion of Cetera Advisor Networks LLC and should not be construed directly or indirectly as an offer to buy or sell any securities mentioned herein. Due to volatility within the markets mentioned, opinions are subject to change with or without notice. Information is based on sources believed to be reliable; however, their accuracy or completeness cannot be guaranteed. Past performance does not guarantee future results. Investors cannot invest directly in indexes. The performance of any index is not indicative of the performance of any investment and does not take into account the effects of inflation and the fees and expenses associated with investing.

For a comprehensive review of your personal situation, always consult with a tax or legal advisor. Neither Cetera Advisor Networks LLC nor any of its representatives may give legal or tax advice.