In March of 2020 I sent out a letter entitled "Calling All Cash" wherein I wrote:[i]

The time is NOW to bring the cash out of the shadows and get it locked and loaded for WHEN opportunities present themselves--for the longer term. This is a terrible virus, yes. Many people are dying, yes. Corporate earnings (most) will be terribly affected, yes. It may take a year or more to recover, yes. BUT--the world is not ending, AND we will survive this, AND the economy will eventually get back to normal. (Just don't ask me when.)

As Machiavellian as that sounds, it didn't take but just a few months for the market to rebound, and rebound it did.  Some of the "opportunities" we saw were indeed profitable.  Since then, we have seen all-time highs across the markets, and as I have repeatedly said, the fundamental math doesn't support the current euphoric market highs.

I always get the questions "why is this going on so long?" and "why does it keep going so high?" and my perennial favorite, "when is it going to drop?"

Well, the simple answer to the first two questions is easy:  new money.

The Fed "buys" these Treasures with dollars that they create from nothing—again electronically.  Those created dollars are then delivered to the Treasury to spend as Congress has mandated.  Or sometimes, the Fed decides the banks need more money (as in 2009), and they will do it on their own volition.

In either event, this is the point where theft occurs.  When a central bank, or a king, government, or any other entity, simply and effortlessly creates the currency that we all have to work for, pay taxes on, and either wither in savings or risk in a consistently manipulated market, the value of our efforts, wages, time value of money, savings, and very future subsistence, is stolen from right under our noses.  It always amazes me that we allow it.

Nonetheless, since January of 2020, the Fed has created $5 trillion in new money to help prop up the system. Needed?  Unknown.  Helpful?  Unknown.  Creates inflation?  Absolutely.

This is why you are seeing double digit inflation at the grocery store and elsewhere.  Certainly, some of the empty shelves are due to supply chain shortages and labor shortages due to Covid and vaccine mandates, but even the Fed is no longer using the word "transitory."  You can always tell when a Fed official is telling you a fib because their lips are moving.

Almost inevitably, the selloff begins with the big players, the institutional investors, and the insiders.  The lawyer and the doctor and the engineer are among the last to know, followed by main street America.

It may be difficult to calculate the intrinsic value of an orange, for instance, especially if you have scurvy, but you can put a price on it based on the relative price of other fruits, like tangerines and grapefruits.  Likewise, it is possible to calculate the relative value of a company based on earnings.  This has been a mainstay financial principle since stock companies were invented in Amsterdam centuries ago.

Today, as I have harangued over the last year, that relative price is historically over-priced.  And it has never NOT come back to the mean.  "When" is another problem. 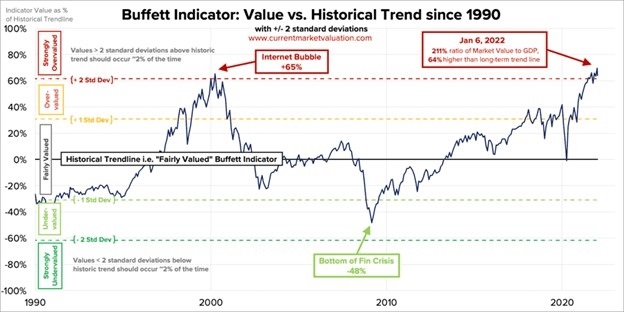 I often refer to the Buffet Indicator to determine the current valuation of stocks and whether they are in line with historical trends or not.  If you refer to the chart above, you can see that the current trendline is 211%, meaning that stock prices are over two hundred percent higher than what the earnings of the stocks suggest prices should be.  What does that mean?

Well, in the words of Mr. Buffet himself: "For me, the message of that chart is this: If the percentage relationship falls to the 70% or 80% area, buying stocks is likely to work very well for you. If the ratio approaches 200%, you are playing with fire." [ii]  This is interesting, because Mr. Buffet said that back in December 1999!  Just four months later stocks started crashing.

But even the Oracle of Omaha can't tell us "when" this current bubble will burst.

For a possible answer to this question, we look to the father of Austrian Economics, Professor Ludwig von Mises:

The wavelike movement affecting the economic system, the recurrence of periods of boom which are followed by periods of depression, is the unavoidable outcome of the attempts, repeated again and again, to lower the gross market rate of interest by means of credit expansion. There is no means of avoiding the final collapse of a boom brought about by credit expansion.  The alternative is only whether the crisis should come sooner as the result of voluntary abandonment of further credit expansion, or later as a final and total catastrophe of the currency system involved.[iii]﻿

Mises wrote that back in the 1940’s, and his insight could not fit the facts any better.  Just a cursory look at the history of our “market cycles” proves that he was absolutely correct.  Today, we are embarking upon the “voluntary abandonment of further credit expansion” as we’ve done so many times before—each time ushering in a market correction.  What are the chances it will happen again?

Last December 15, the Fed announced in a press release that it will begin reducing the bond buying by mid-January and is expected to raise interest rates three times this year.[v]

So, abandonment steps one and two are beginning this year.  When will they end?  As always, the Fed will know exactly when to end them because the markets will crash, just like they did in 2000, and again in 2008.  That's how they know—that's how they always know.  If it were not the case, there would not be the sharp interest rate reversals that we see time and time again.

So, as investors, what are we to do?

Well obviously, NOW is not the time to be aggressive.

Our clients' portfolios have been leaning about 20-30% more conservative than normal for the last six months or so.  This is fortuitous if the market tanks, but it has a lagging effect on your portfolio when the market continues to run.  This happened in 1999 and 2007, and it happened again last year.

Unfortunately, there is no way around this.  Timing a market crash perfectly is impossible, and everyone I've talked to agrees that it is better to be too early than too late.   I know that's how Warren Buffet feels.

But what’s important is how YOU feel.  If you are having concerns or dealing with nagging questions, my line is always open to you.

Two of the most difficult “feelings” an investor goes through is “the fear of losing out” and the “fear of buying in a falling market.”  Today we are asking for patience; hopefully soon I will be calling all cash again.

We appreciate having you as a client and remind you that as fiduciaries we are always working in your best interests.  We look forward to seeing you soon at one of our in-person or web events.

Henry will be giving a webinar on Tax Law Changes for 2022 on February 1 at 11AM.  If you are interested in attending, but haven’t received an invitation in the next week, then feel free to contact the office to sign up.  We hope to see you there.

As always, if you have any questions or concerns, do not hesitate to reach out to me at kevin@magellanplanning.com.